Just as Android's market share continues to grow in the mobile world, the battle is also spreading to tablets.

And while there have been a few less polished tablets with Android, Samsung's Galaxy Tab represents the first mainstream Android attempt and, quite frankly, the first real competitor to Apple's iPad. 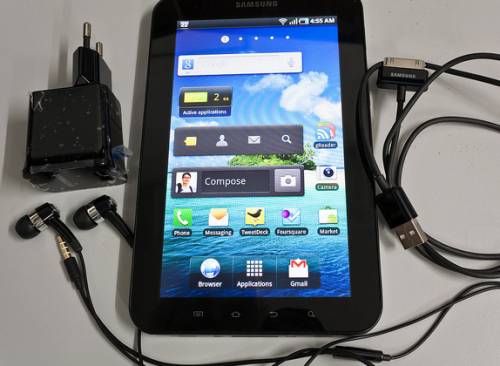 On the surface, the Galaxy Tab boasts impressive specifications with a Cortex-A8 1GHz processor, 512MB of RAM, 16/32GB storage (expandable), a 7-inch display with a 1024×600 resolution, and 1.3 MP and 3MP cameras with features such as auto-focus and LED flash.

It's also slightly thinner than the iPad and supports Flash unlike the device. But enough about the specifications, let's get to the design.

The Galaxy Tab sports a power button, volume controls and a microSD card slot, on the right end of the device.

The Tab features four buttons near the bottom, but this is less a design by Samsung than a necessity of Andriod. It needs at least three navigation buttons for almost every app.

This is great but when you rotate the tablet to its side, it does take some time to relearn the order of the buttons.

We must also mention that the device also contains a 30 pin connector that can be used for syncing and as well as for cradle accessories and docks.

The Tab runs on Android 2.2 out of the box, which isn't the latest version but it is a stable OS with decent multitasking and access to the file system. It comes bundled with free mobile office suite and Amazon's Kindle app.

Both can be downloaded for free but it makes a Quick Start that much easier.

But speaking of Apps, that's one place the Andriod Market needs some improvement. Because unlike Apple, developers cannot program specifically for a tablet or a phone. So the end result is that the interface isn't always optimized for a tablet.

As for the web browser, which is undoubtedly where you will frequently spend the most time, works well but we did notice a lag.

Even on our Wi-Fi connection, often the tablet would load the content rather slowly. This may be a consequence of the Google WebKit, which ensures content is rendered correctly, but it was a tad slower than the iPad in direct comparison tests.

The inclusion of Flash on the browser is a nice add-on to have, but the truth is that the implementation included with the Tab leaves much to be desired. The audio and video were not always smooth and the inclusion of Flash content on a page was definitely noticable in the rendering time for the tablet.

Fortunately, the device includes the ability to only enable Flash when needed.

The camera is definitely what you would expect and can come in handy for more than taking quick snaps with the ability to use it on barcode scanners and the like.

At the time of this review, the Galaxy Tab retails for $599 in the US.

That's $30 less than the iPad but given some of the drawbacks we outlined above, we're not so sure the difference is enough to justify its purchase.

The Tab is a good starting point but since Android is still a growing ecosystem, it would be wise to spend the additional $30 for more screen real estate, tablet-optimized Apps and a larger screen.