Overall the Logitech Wingman Joystick seems like a good buy. It has a low cost. It has four axis (X, Y, Z, and throttle) that allows for a good flight stick. It has 6 buttons, plus the fire button. It has an 8 postion hat switch, and is USB with the help of the included connector. All of that for less than 50 US is really worth it.

The stick itself has a great range of motion, though like most joysticks it has that 'box' feel to it. That is, if you pull the joystick down and to the right, for example, it feels like it's been pulled into the corner of a box and it requires some training to make smooth transitions from one direction to the next. At least from this extreme point, anyway.

The overall shape of the device is interesting, in that it slopes down into a near point. The thinner section is the section that you would have sitting on your lap, I supose this makes it easier to hold and makes it lighter besides, but since I tend to keep my left hand on the front of the joystick (near the throttle) I don't notice the shape at all. 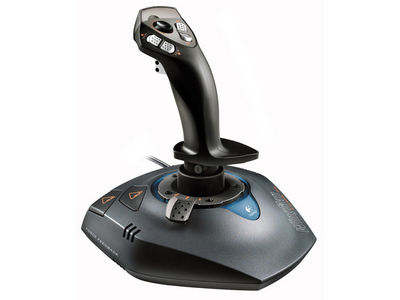 The joystick handle has a built in palm rest, which if you play a lot of games is both a blessing and a curse, being that over a certain amount of time your palm actually starts to hurt from sitting there... I know, I should go outside more.

I've never had issues with the buttons. They all work, even the hat.

My one and only issue... and it's a big one... is that the joystick sometimes just stops working. It is always the same routine. I'm playing a game. I need to get up and go do something, so I set the joystick down on the chair as I leave. When I come back there is a high chance that the joystick has become inoperable and I will be forced to stop the game, and have windows do it's magical find the new hardward spell. I don't know what causes it. I thought it was loose wiring in the joystick... but it only happens if I set the thing down, and does not happen if I move the wire. I thought maybe it was the plug in the back or the machine... no. I even queried the idea that it might be static electricity build up on the chair.

What ever the case is, it stinks! I've never seen that before in a joystick, and I've owned a few of them.

I still recommend it, but be wary of this and a search of Logitech comes up short on any kind of help... so it could be that I'm completely isolated in my issue.

I say if you are in the market for a 4-axis joystick and don't like the feel of the Saitek version, and can't spend the money on something with forcefeedback, that this Joystick is still the best for what you get. You'll just have to sit there and play all the way through the game without interuption. If you're married, that might not work.